I wrote this before my New York Times story posted about a year ago and submitted it as an alternative essay on my mother. I am posting this here because I learned that many, many people read my NYT story online and realized their parent had this very condition based on my mother’s symptoms and diagnosis.

At this point, there is still no cure for PSP, but I hope that knowledge of the disease, and options for care, help in a small way. Writing has always helped me heal. But there is also no cure for the pain we feel seeing our parents suffer. I hope my stories find you and help you find strength. Hugs. 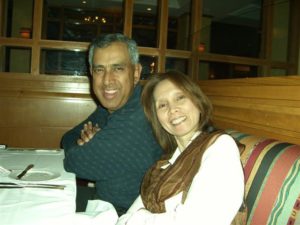 In the quiet hours of the morning, I take a minute to gaze at this once, strong, healthy, beautiful woman I love. She can no longer stand on her own. She used to make beautiful beaded necklaces with her hands; her digits now lie mostly limp beside her in her bed, except to clutch a ball to improve dexterity or to hold a handkerchief to dab her face. My family and I have seen my mother, Betty, deteriorate before our very eyes, thanks to a very cruel disease.

We used to sit at the kitchen table every night and share stories, before it was time for dinner. Nearby, she hung bright Christmas balls from satiny ribbons from the ceiling for decoration, and they stayed there all year. We never questioned it. The family crowded around the dinner table every day, making jokes till we cried, enjoying mom’s food, a feast made with her tiny hands.

My mom is a giver. She is selfless and full of heart. My father wanted a son, so she gave all she had, to give him five children. My brother is wonderful, and so are all my sisters. She gave us all she had. She would handle all the cooking and cleaning — five kids worth of laundry, dishes, messes — with barely a complaint. If she was home and had a minute, her hands never stopped moving: it was an opportunity to iron, fold or clean. She had an effortless rhythm to all she did, even when crafting decorations like origami eggs, Halloween costumes, handmade birthday cards.

She can no longer do any of these things, but there’s one thing has never changed: mom is still a tiny ballerina of a lady, at 73 lbs. That’s what all the nurses would say, “she is so small,” without fail, every day. She was just in the critical care unit of Summerlin Hospital in Las Vegas for three weeks, all because she was having trouble breathing one night.

The disease first came after her legs, pulling them down, once, in front of a police station in Tokyo, the city where mom and dad met and raised their kids. We thought it was due to her inner- ear imbalance. My mom would obsess about her health constantly, to the point that we didn’t know how to discern what was problematic. It was probably nothing, I thought to myself. Until the disease would pull her again and again, swing her into a wall, pull her body to the floor of our hotel room, turning her head into a giant balloon of blood before my very eyes.

Except of course it wasn’t nothing. It was PSP, Progressive Supranuclear Palsy, so Dr. Rivka Sachdev, a neurologist at Beth Israel in Union Square, told us, in the summer of 2013. She had thoroughly examined mom, noticing that she still had a solid memory (having asked her to remember three words between visits: “desk,” “green” and “camel,” that mom could easily recite back to her on every visit.) It was the way mom’s eyes moved during an eye test that gave her away. Dad, mom and I sat there, stunned.

The disease is rare, mostly unknown. I could barely find it online, except for a web site by this one foundation, CurePSP, and no one I spoke to had heard of it. The condition is a rare brain disease that affects five to six people out of every 100,000 and has no proven medical treatment and no cure, and is often confused with Parkinson’s because it is so similar.

One day Patricia Richardson was on the CBS TV show, The Doctors, talking about her parent who had PSP, and she shared the average life expectancy of someone with the disease, which was under five years. I turned the tv off and started to cry out of shock and anger, like someone who was given the ending to a movie without expecting it. (The information provided turned out to be incorrect: these days those with PSP can live much longer.)

The disease then came after my mom’s left side of her body, rendering it mostly limp. The woman who would bicycle to my school with a hot spaghetti lunch at exactly 11:45 am, to the envy of all my friends, was now reduced to a wheelchair. She and dad decided to move to Vegas in April 2014, and dad asked Saya, my fourth sister, and her husband, Adam, to move in with them. 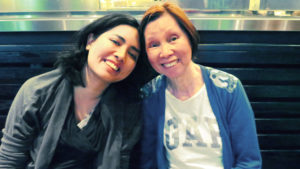 Before then, mom had been obstinate, strong-willed, stubborn: this disease would not get the better of her. She walked with a cane, or not; we would walk close beside her to make sure we’d catch her before she could possibly fall. And none of us wanted anything to change, well, why would we. I took her hand and brought her to the Met, the MoMA, anywhere I could, with my then seven-year-old daughter in tow. Once, I was holding mom’s shoulder to my left and my daughter’s hand to my right at Ikea in Red Hook, Brooklyn, admittedly taking up a lot of space, walking the aisles. A lady said, “Excuse me,” and I blew up at her, in anger, which was mostly displaced for sure. But we never got a lot of sympathy for mom in New York anyway: she and her wheelchair were just in the way. I envy those who have no idea what a disabled person goes through. I might’ve been that person once, myself, even sighing as I passed the slower person by. Now I cringe thinking about it.

We did everything for mom, the way she had done everything for us: we gave her a shower in a bathchair, we brushed her teeth and lifted her in and out of the toilet. She helped any which way she could, holding on to us for support and moving her head or hands in the right direction without our asking.

She still assists, as she did in the hospital bed, when the nurses turned her from one side or another, rotating her to avoid getting any bed sores. Or when they needed her to open her mouth to brush her teeth, she would pry her mouth open as large as she could.

The disease came after her mouth and throat next, making it hard for mom to chew and swallow. Right before that, when she could still feed herself, she would not be able to stop drooling, and it was incredibly hard for her to eat in a restaurant. For her own sanity and self-preservation, we stopped going out to eat as a family after the Christmas-New Year break of 2015–16.

Soon enough, the disease stopped her from eating and drinking altogether: about a week after New Year’s in 2016, I came back to Vegas to be with mom for her feeding tube operation. She could still taste certain things with her mouth, we reassured her, and ourselves. The surgery, which we fretted about for hours and hours, took a little less than 120 minutes: but a new chapter of our lives had begun.

We started putting mom on a feeding schedule, measuring out liquid nutrition into syringes we’d inject into the tube in her stomach. Food was one feeding, meds were served the next. Gas pain and cramps became a way of life for mom, whose face would twist in pain, as she forcibly squeezed my hand into hers. Painkillers for pain, anxiety and rest were also the new norm.

“But she hasn’t lost her mind,” a friend recently said, to comfort me in some way.

True, she is still quite sharp mentally and responds to questions when prompted. But in the five years my mom has had PSP, mom can no longer walk, and she can no longer talk.

And now, she can no longer breathe on her own.

She will spend the rest of her days in a hospital bed, where we will monitor the water levels of her ventilation machine, making sure the tracheostomy tubes are in the right place and that she is getting the oxygen she needs, feeding her a series of medications to avoid other problems, such as atrial fibrillation, ulcers and anxiety.

But she will be home, mercifully, where she will get the round-the-clock care and love she deserves. I look forward to tenderly washing her hair, caressing her cheeks, lifting the soft flesh of her arms and legs to gently tilt her, playing ball with those small, frail hands. It’s the least I can do for a singular mother like mine.