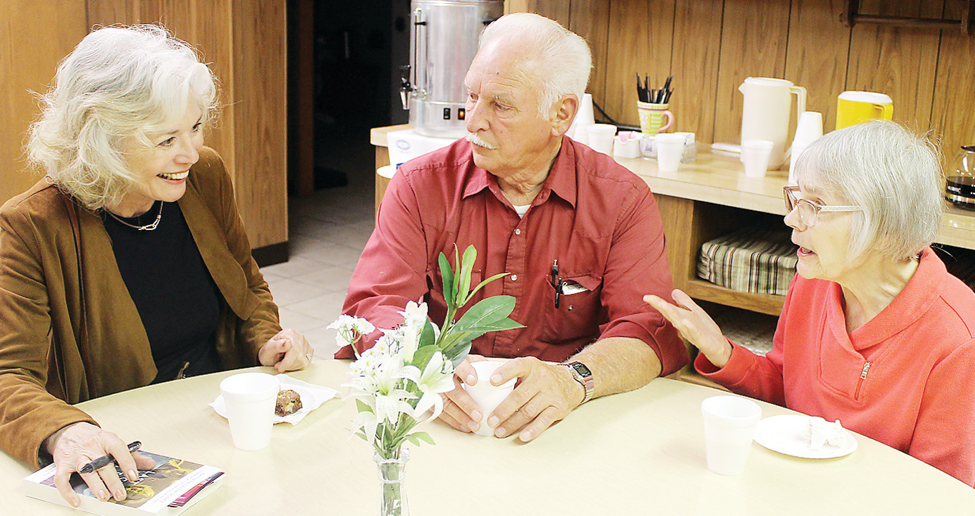 Originally printed in The Timberjay.

Growing up on a small family farm outside of Minneapolis, Kathryn Leigh Scott loved to write and put on plays, often casting her little brother, Orlyn Kringstad of Tower, in roles that required him to don wedding dresses. The children, Orlyn explained while introducing his sister to many local residents who attended a talk at Immanuel Lutheran Church on Monday, would use the empty crates at the family’s roadside stand for props.

But after receiving a scholarship to attend the American Academy of Dramatic Arts in New York City, Kathryn’s career took a more professional course, starting out on the gothic-inspired soap opera Dark Shadows, then moving on to dozens of roles on both the small and large screen, acting alongside notables just as Jimmy Stewart, John Wayne, and even an episode of Star Trek Next Generation with Patrick Stewart.

“I’m a bona-fide antique,” Scott quipped after playing a short video highlighting some of her many roles over the past 50 years. Kathryn also wrote numerous books, including many relating to Dark Shadows.

But Kathryn was not in Tower to talk about her acting career; she came to discuss the role of caregiver to a spouse who was diagnosed with a neurodegenerative disease in his 60s.

“Everyone here has been a caregiver,” she noted, “either short-term or long-term, to a child or a parent.”

Kathryn’s turn was when her husband, Geoff Miller, a successful magazine publisher in Los Angeles, was diagnosed with Progressive Supranuclear Palsy, PSP, an uncommon brain disorder that affects movement, control of walking and balance, speech, vision, swallowing, mood, behavior, and thinking. It is estimated to affect three to six people per 100,000, worldwide. It is much less common than Parkinson’s disease, another similar movement disorder.

The disease is often grouped with other so-called “prime of life” diseases like ALS, Parkinson’s, Lewy Body Dementia, and Alzheimer’s, and it shares symptoms with diseases that occur with traumatic brain injury.

“Life is not a fairy tale,” she said. “Geoff often said no one gets out of life alive.”

Geoff was diagnosed at age 68, but in retrospect showed symptoms of the disease several years prior. PSP is often characterized by the tendency to fall backwards.

“He was falling a lot,” she said, “but there always seemed to be a reason.”

Scott, who has written a book about their experience with the disease called “Last Dance at the Savoy,” said in the years leading up to his diagnosis, she had unwittingly picked up many household duties formerly done by her husband. He had stopped doing things, she noted, because they were too difficult for him to do.

Eventually they did realize that something was wrong, and received the diagnosis.

Scott’s book focuses on the role of the caregiver, and the importance of finding support from those going through similar trials.

Geoff’s doctor had asked her to keep a journal, to document possible changes from different medications, but Kathryn also used the journal to document their thoughts and feelings in great detail, which grew into the book.

“It is very isolating to be a caregiver,” she said, “many friends fall away.”

She said many friends felt awkward and didn’t want to visit, and that Geoff really missed his friends.

“We created the Miller Happy Hour,” she said. “We made our own cocktail lounge with music and drinks from 5-7 p.m. We let people know it was a good time to drop in to visit with no talk of the illness.”

She also talked about the importance of support groups, both for specific diseases and for caregivers. She talked about how hard it was the first time she attended a support group for PSP, to see people who were farther along in the disease.

Assistive technology helped with vision- and speech-related issues, and physical therapy helped retain his ability to walk, she said.

Kathryn also spoke about the importance of having end-of-life plans in place.

“You need to prepare and talk about it,” she said. “I learned that Geoff really wanted to be a guinea pig and part of research. He wanted to be an organ donor.”

Kathryn said she feels the need, also, to give back.

“I got so much support from other caretakers,” she said. “Now I am paying it forward.”

She noted that a support group for caregivers, sponsored by her church, was very helpful.

“You do get frustrated,” she said. “You lose your temper. Sometimes you want a highball for breakfast because you didn’t get any sleep the night before.”

“At times I felt so overwhelmed,” she said. “You need someone to talk to about it.”

“A big ingredient in care giving is hope,” she said. “I’m speaking to raise awareness and encourage research. Perhaps there will be a breakthrough soon.”

The talk was hosted by the health ministry group at Immanuel Lutheran Church in Tower.