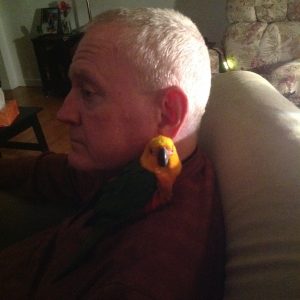 This morning my wife said let’s go out to breakfast. I was a little bit reluctant because of my poor walking but I showed enthusiasm.

My upper body wasn’t working well so my wife helped me on with my coat. That’s something I used to do for her when we were younger.

More of my male ego was trashed by PSP.

I walked out onto our aluminum ramp holding onto the railing while avoiding any bird poop.

Birds are really rude and have no sense of decorum.

I maneuvered myself into the car successfully and we were underway. It was an uneventful ride and I enjoyed looking around at the scenery. Eventually, we arrived at the restaurant near a large mall. I got out of the car with the aid of my wife helping me out of my seat. The handicap ramp looked like it was 1 million miles away. I aimed for it hoping I wouldn’t fall on the parking lot. When I got to the railing I grabbed it with a death grip.

It’s amazing how PSP alters how you think about an ordinary thing like going from a car to a restaurant.

Upon reaching the top of the ramp I was confronted by the door. It felt like a Herculean task to pull it open but I did it anyway because it was a manly thing to do. My wife grabbed it out of my hand to prevent me from falling as I yanked on the handle.

God help me if I had been in a wheelchair. I would have needed assistance from bystanders, just like in stores that did not have an automatic opening device. Such a simple thing that I had always taken for granted. How times have changed.

The second door was a bit easier because you pushed rather than pulled and I managed to hold it for my wife like a good gentleman. I walked over to the counter and immediately grabbed hold. The cash register was right by the counter.

I hope that he didn’t think I was going to rob the restaurant.

A waiter came up to us and showed us to our table which happened to be at the far end of the restaurant. The waiter apologized for the long walk because of the large amount of patrons.

We were seated and I ordered an omelet and potatoes and toast along with coffee. There was something interesting called a Mediterranean omelet and I looked forward to trying something new. We looked around at all the various people and made small talk. The restaurant was packed and the diversity of people was interesting to behold. My wife made a comment to that effect. Eventually our food and drink arrived.

Now came the hard part. Eating while handicapped by PSP and the stroke that affected my left side (and I am left-handed). I have tried eating with my right hand but it doesn’t work out well so I just put up with the shakes on my left side.

For some reason, PSP has affected the strength in my hands. Or maybe it was the stroke. In any event, I had trouble pressing down on the omelet and its encased spinach so I had to resort to a knife in my right hand to assist. So far so good. Now came the hard part. Using the fork to take the food from the plate to my mouth. Half the time, the food shook off the fork onto the plate or into my lap. I decided to use a spoon. I tried to keep my head down as I ate because every time I looked up the room rotated because of PSP. I probably looked rude to everyone except my wife who understood my dilemma. Luckily, everyone was paying attention to each other and didn’t notice as far as I could see.

I felt like a baby all over again. At least I didn’t slobber.

I carefully put cream from the little container into my coffee, trying my darndest not to drip it all over the place. I managed to succeed and even got the jelly onto my toast without getting too sticky.

Eventually, I finished eating after having taken twice the amount of time as my wife.

Either she was very fast or I was very slow. Probably the latter. The main difference was that some of my food was on the floor and in my lap and in her case the same was not true.

She got up to go and pay the bill and saved me the problem of leaning against something waiting for her to do it. I long since gave up carrying a wallet because of manipulating it out of my pocket. It’s strange that I can have such strong legs and such weak hands.

Oh well, PSP is weird. Or I am. Probably a little bit of both.

She came back to get me and helped me to stand up. At the far end of the restaurant, she realized that she forgot to leave the tip so I found the nearest thing to lean against and waited for her to return after finding the waitress to give her her tip in person.

We returned to the infamous doors at the ramp and got into the car and proceeded home.

Breakfast had been accomplished and I had not fallen once. The meal was very good and the waitress was very kind and very understanding.