“Why are you shuffling, mother?” I asked that question eight years ago. That slight drag in her right leg started a progression of doctor visits and tests.

I am the older of her two daughters. My younger sister, Terri, and her family live in mother’s hometown in Michigan; John and I live in Naples, Florida. Our journey follows the similar pattern of so many victims and their families. 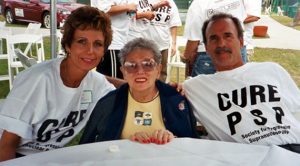 Mother’s story is a bit more unique as she is now 84 and has battled PSP for about ten years. I was told because of her late-in-life onset of the disease, it would be a slower deterioration. Our beautiful mother who was always our strength, guidance, and rock is now slowly being stripped of her ability to walk, talk, and live. She retired as a secretary/bookkeeper after the unexpected death of our father in 1982. Her strong independent German nature still prevails, in spite of her PSP.

It was so true when one of mother’s nursing assistants told me, “You are the mother now.” My heart breaks for her as she relies on me and others to take her to the bathroom, dress her, and even comb her hair. All of her independence has been taken away. On her good days, I look into her brown eyes and see mother’s comprehension of what is happening to her.

After five years of being misdiagnosed and treated for “non-tremor Parkinson’s,” we tried one more evaluation from a Naples neurologist. After watching mother walk, combined with several eye tests, it took him less than 30 minutes to diagnose PSP. After I told mother’s original neurologist from Michigan that she was diagnosed with PSP, it angered me when he said “I’ve never heard of it.” How many others are being misdiagnosed and treated for Parkinson’s and not correctly diagnosed with PSP?

I never felt comfortable that mother’s symptoms fit Parkinson’s criteria. After reading the symptoms of PSP, it all fit and answers were found. Sinimet treatment was stopped. It was like a light came on in mother’s brain, and we got our mother back. She greatly improved mentally! We have journeyed through fall alert monitors, ramps, her bed elevated in our home, thickened liquids, pureed foods, and daytime caregivers as John and I both work full-time jobs. She has had one VitalStim treatment which improved her swallowing and speech temporarily.

We were able to keep mother with us at home for about two years. This would not have been possible without John’s help. He even now drives her to appointments, has taken her into bathrooms, picked her up after a fall, and has unselfishly sacrificed to give her as much priority, dignity and quality of life as possible.

A care facility is where mother now resides. I thank God we found this facility only eight miles from our home. After a broken arm and staples to close a gash in her head from a fall, we realized we could no longer keep mother safe and she would require twenty-four hour care.

Educating not only the care facility and anyone who will listen about PSP has become a normal part of my life. I have also discovered that most hospital personnel have never heard of PSP, therefore I must also educate them about this disease.

It was three years ago this past January that John excitedly showed me a newspaper article in our local paper titled “Naples PSP Awareness Walk.” We also saw a local TV station air a promotion for the walk-a-thon and an awareness segment on PSP. It was the first PSP walk in Naples and we took mother, then using her walker, to the event. This year was our third participation with mother now in her wheelchair. I thank God for meeting Joan Reifler, the local walk-a-thon chairperson, the wonderful families and friends of PSP victims, and the kindness and support from the Foundation for PSP and its staff.

I couldn’t finish reading Patricia Richardson’s beautiful piece about her father; the tears in my eyes hit too close to home as mother is getting closer to her journey’s end.

Mother is our priority and focus. I go everyday after work to take her outside for a walk in her wheelchair. We sit and visit, and work on her speech therapy. She rarely, if ever, speaks complete sentences now, nor has she ever complained. Her smile lights all around her. I can still bring her home for the day on Sundays, but I know in my heart that soon this will also not be possible. She has shown courage and strength and acceptance. I am so grateful for her good days when she is not in a “fog” or having problems concentrating on our conversation.
I asked her on her eighty-first birthday if there was anything she wanted. She slowly and softly said, “What I want, you can’t give me……..my health back.”

To find treatment and even the cure for this brain disease is something mother probably will never see. I will, however, continue to support, educate, and spread the words of awareness about PSP in her honor.

On behalf of all those affected by PSP, and in honor of my mother – Dorothy MacDonald, I thank you for your support.