The primary tauopathies, often referred to as the frontotemporal dementias (FTDs), include Pick’s disease, progressive supranuclear palsy (PSP) and corticobasal degeneration (CBD). The tau protein plays a central role in the pathogenesis of these neurodegenerative disorders. Tau aggregates can accumulate alone, as in the primary tauopathies, or in concert with other peptide aggregates in other diseases. Tau aggregates have been found with amyloid β (Aβ) in Alzheimer’s disease (AD) and also with PrPSc in familial Creutzfeldt-Jakob disease (CJD) caused by an insertion mutation and in Gerstmann-Sträussler-Scheinker (GSS) caused by an amino acid substitution. After the centrality of tau was established in Pick’s disease, PSP and CBD, a series of incisive studies demonstrated that tau proteins can undergo transformation into prions that are self-propagating. Tau prions spread throughout the brain, analogous to PrPSc and Aβ prions that cause CJD and AD, respectively. The ability to quantify tau prions offers new paradigms for early diagnosis and effective therapeutic intervention in all of the tauopathies. This study is developing bigenic (double transgenic) rats that express either wild-type or mutant human tau along with luciferase under control of the glial fibrillary acidic protein gene regulator or promoter. These bigenic rats will provide a second genetically engineered species (mice being the first) to assess the efficacy of lead compounds that are being developed as therapeutic interventions for the tauopathies. In addition, the bigenic rats will provide a much improved tauopathy model for assessing the efficacy of PET ligands for neuroimaging; such ligands (reporters) are crucial for the early diagnosis of the tauopathies so as to initiate treatment prior to the occurrence of irreversible brain damage. 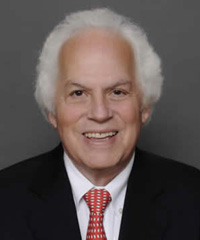 Dr. Prusiner discovered an unprecedented class of pathogens that he named prions, for which he received a Nobel Prize in 1967. Based on his seminal discovery that prions can assemble into amyloid fibrils, Prusiner proposed that the more common neurodegenerative diseases including Alzheimer’s and Parkinson’s diseases may be caused by prions.

Prusiner’s contributions to scientific research have been internationally recognized and he is the author of over 500 scientific research and 300 review articles, and editor of 11 books on diseases caused by prions. Prusiner’s book, Madness and Memory, which chronicles his discovery of prions, has received wide acclaim.  He received his BA in Chemistry in 1964 and his MD in 1968 from the University of Pennsylvania. After completing his military service as a lieutenant commander in the U.S. Public Health Service at the National Institutes of Health and his neurology residency training at UCSF, he joined the UCSF faculty in 1974 and set up a laboratory to study brain diseases.