Today I am going to write about something different. 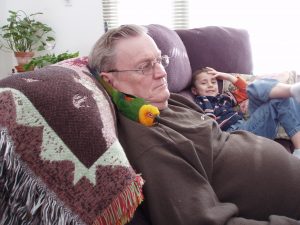 Earlier in one of my articles I said that I would not talk about the open-heart surgery but I’ve changed my mind. It is worth going over because I can find something humorous about something as serious as that as well as anything.

It was August of 2015 and I was taking a short walk of about three blocks. My wife dropped me off and went to the store. I told her that three blocks was about all I could handle anymore. I was so tired. I felt like I was 110 years old.

I wondered if I looked like a drunk as I staggered down the street.

I managed to get home and crashed into a chair.

My wife got home and I told her my state and she decided to call a cardiologist that she used to work with years ago as a nurse.

I got an appointment for a stress test in a few days. I don’t remember if I had a contrast injected or not but that is beside the point. I could barely manage anything more than a slightly fast walk and told them. I was breathing very rapidly and they shut down the treadmill. They asked me if I was okay and I told them no but I can manage. They asked me to remain seated until I felt better. After a while they came back and helped me get up and walked me to the waiting room and my wife.

The next day the doctor called and asked me to come to his office in a few hours.

He told me that my stress test was terrible and suggested open-heart surgery the next day. I asked him if he was absolutely certain. He responded that he was and that I needed to have this done as soon as possible in order to prevent a heart attack.

My mood could be described as “sour grapes.” Not a good thing.

The next day I arrived with my wife, daughter, and son. They are my support group and I appreciated the fact that all of them were there.

Of course I would have been much happier sitting at home reading a book.

The nurse requested them to leave the room and I changed into a dressing gown. She pulled it up and I felt like a nudist. She shaved my unmentionable parts and chest. Then she proceeded to coat me with an orange fluid from the neck down. She told me that it is a sterile solution that is good for many days and will prevent infection. She covered me again and asked my family to come back.

I told them that I wasn’t nervous.

I can lie like hell when I have to.

We chatted for a while and they came for me and I was off.

The adventure had begun.

I arrived in the operating room and they had me wiggle off the gurney onto the operating table.  I tried not to look around. All the stuff looked too scary to stare at.

They asked me how I’m feeling that day and of course I told an untruth.

They injected me with the anesthesia and thankfully I was off to oblivion within a few minutes.

Sometime later, I was totally unsure of how much time, I dreamt that I was in a vast parking garage that was totally empty except for one car. The emptiness of the garage filled me with loneliness. In the distance I heard people talking but I could not hear what they were saying. I only know that I was scared of this place. It was so lonely. The rest of the dream I cannot remember except that eventually I was close to those people but I still had trouble comprehending what they were saying. Slowly the words started to take intelligible form in my mind.

“Now I’m going to take this out of your throat and you have to start breathing on your own.”

Breathing? Really? I’m not breathing? What did they do to me?

They pulled it out of my throat and I’m lying there not breathing at all.

“Sir, you have to start breathing on your own or we will have to put it back in.”

I decided to start breathing and it felt weird.

They were happy. I was happy.

I’m not sure about the comings and goings of the nurses because of the anesthesia but I do remember the awful feelings.

I felt that I was in a construction site because I could hear, or thought I could hear, hammering. The light was dim and I could not understand why I was there. At one point, I thought I was kidnapped. I was going to call the police but could not find the phone. In fact I could not even turn to find a phone. I didn’t even know where I was so how could I tell them.

At some point, a man came in and told me he was going to take my tubes out. I had no idea what he was talking about. He told me to start counting, so I did. Suddenly he pulled and I felt something yanked out of my chest or stomach. It hurt a little bit. Then he told me he’s going to take my catheter out. I had no idea what a catheter was. I started counting. He yanked and I felt pain and yelped. He explained what he did and what a catheter is.

I am satisfied but still confused about my setting.

I actually had forgotten that I had open-heart surgery.

At one point, I imagined that a beautiful orange and white kitten was walking towards me to be petted. It never managed to arrive at my bedside. I really felt like I was losing my mind at that point. I couldn’t see a clock and kept pushing the button for the nurse. I must’ve done it every hour and a half and she was very patient. She told me it was nighttime and that I should try and get some sleep. Finally, light appeared and I called for the nurse again. She opened the blinds to let the daylight shine in.

I didn’t know I even had a window.

Later in the day, my family came in. They looked concerned but put on a smile. I asked them how I looked. My son Sam responded.

Mary and my daughter Amy told me that I looked all right for an open-heart patient.

There were still wires and IVs and I felt like part machine myself.

The most embarrassing part was using a urinal.

Modesty is not part of the hospital regimen.

Eventually my family went home after visiting hours ended. The night began and another adventure as well.

After dark I called the nurse and asked for a urinal and found that I could not go. Pain started. Eventually the pain became extreme. The nurse quickly did an ultrasound and found that I had bladder inflation. After what seemed like an interminable amount of time she inserted a catheter which really hurt and the pressure receded. She mentioned that I had been given a diuretic and that it had probably caused the problem.

Ironically, because of the pain medication my chest never hurt. I wish it had worked for my bladder as well. Eventually, the catheter came out again with another yelp for me.

Eventually they got me out of bed and gave me a walker to use with my wife and a nurse as an assistant. I got a few feet into the hallway and had to crash into the nearest wheelchair. The walker went flying across the hallway.

It was the first of many crashes and I was going to become good at it.

After about three days or four I was sent to cardiac rehabilitation.

When I got to this section of the hospital I was well enough to walk with a walker.

When I got off the elevator and started walking I started to walk faster almost as if I was running. I couldn’t control it and my wife tried to slow me down. People smiled and thought I was running to my room.

What I did not know was that my PSP had been exacerbated by the general anesthesia and the necessary operation. It was a very strange feeling and no one could explain it.

When I had my follow-up visit at the cardiologist, he explained that it does happen often after open-heart surgery. A medical condition would worsen after the surgery and it could not be helped.

It was either have surgery or die of a heart attack.

At least it has a name now…