This article was published in the Tallahassee Democrat, May 19, 2018

I talked to my mother on Mother’s D 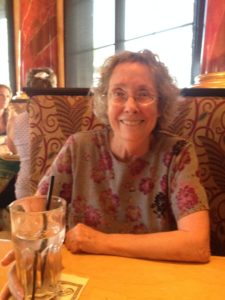 ay. Only it’s not really talking anymore; often all she can muster is a wail of lament.

I know why she is wailing. It’s this horrible disease, progressive supranuclear palsy. It is killing her, breaking down the nerve cells in her brain, quieting her limbs, taking her bit by bit. Eight years after first showing up, it’s taken almost all of her.

PSP is a relative of Parkinson’s, but it’s rarer and there are fewer treatments. Words are inadequate to capture the horror and despair of what has happened to my mother. Her mind is perfectly sound; it’s her body that’s failing. There is nothing to do. It won’t stop until she is completely gone.

A few years ago, back when speech started to elude her, she hissed at me, “Just wait until this happens to you!” It stung at the time, but I knew it wasn’t my sweet mom, it was those angry, disintegrating cells shouting.

PSP isn’t something you catch nor is it passed along to your kids. You don’t bring it on by your own bad habits. It just shows up one day when you are browsing Kohl’s for the best deal on seasonal St. Patrick’s Day tea towels to put in the care package you send for every Hallmark holiday to your daughter in Florida.

You feel off-kilter. Soon, you can’t catch your balance and you start falling. Your eyes begin to not work right. You don’t know what is wrong so you run the doctor circuit looking for one who can tell you, who can give you a name for this. When you hear it, you wish you never had.

You’ll need a cane, then a walker, then a wheelchair. Inevitably, you are bed bound, barely able to chew, speak or see. Something pedestrian finally ends it, you fall, you choke, most likely pneumonia does it.

“Remember me dancing,” my mom managed to tell my stepdad a couple months ago, as she was wheeled out the door headed to the place with round-the-clock care where she will die.

Modern medicine knows what brings on many diseases, but no one really knows why the 20,000 people in the U.S. – about three in every 100,000 worldwide – who get PSP are struck with such terrible luck.

My grandmother had terrible luck too, but doctors knew exactly what happened to her.

While watching the ponies race at Rhode Island’s Narragansett race track, Marie McKinnon Conroy was bitten by a horsefly infected with equine encephalitis. She spiked a fever and in three days that pretty lady was dead. Marie was 33. My mother was 6 and her sister, Kathleen, was not yet a year old. 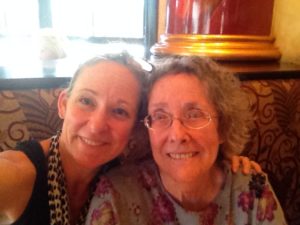 I’m not sure what my mother makes of all this. Even before uttering a single word became such a labor, she wasn’t one for rummaging through the painful episodes of her life, at least not with me. It was easier for her that way, I think. I know there were plenty of upsetting things stashed in the attic of her past.

Up until about four years ago – when things really started going to hell – I’d visit her in Las Vegas where she made a successful career selling new homes. She’d take me shopping for clothes and we’d get our toenails done. We played Scrabble and I’d fume how she always beat me – all that Latin she learned in Catholic School, I didn’t stand a chance. Like all good moms, she was happy if I was happy. If things in my life were going well, she was relieved; when things were tough, she worried. We liked to keep it positive and light.

I didn’t spend much time with my mom as a teenager. I chose to live with my dad when I was 12, a few years after their divorce and she didn’t argue. Now that I’m a mom raising a teenager I sometimes feel like I’m navigating a dark ocean without a map, and I don’t know how to read the stars.

Maybe my mom felt like that her whole life.

On Tuesday evening the hospice nurse called. I already knew from my stepdad things were getting worse, fast. I’d bought tickets to fly out in two weeks to see her, but she said I’d better come now. When the hospice nurse tells you to come, you come.

“Just come and hold your mother’s hand,” Velma told me over the phone from Phoenix.

Jennifer Portman is News Director of the Tallahassee Democrat. Contact her at jportman@tallahassee.com.