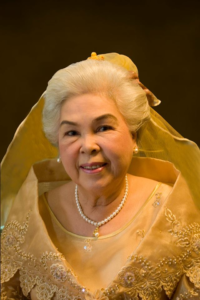 In Tagalog, the native language of the Philippines, Lola means grandmother. My Lola, Mercy Lotilla Asencio (pictured), lived in General Santos City, at the southern tip of the Philippines. She was the mother of seven children; my mom is the oldest of those seven, and I am the third oldest grandchild of 15. As a music graduate, my Lola was the city’s music teacher in piano and voice, as well as an English and music professor at the university.

She was, however, very widely known not only for her music but also for her charity. She created a foundation called the Divine Mercy Foundation, providing for the medical and basic needs of the poor, as well as a drug rehabilitation center. She was a woman of service.

Because I grew up in the United States, I only visited her when I was younger than five years old, and then again five or six times in high school and college. In fourth grade I wrote a biography about her, having interviewed her over the phone; her life was especially fascinating because of her experiences during World War II. During my early high school years—when I was finally old enough to realize the importance of spending time with family—she had already started to show symptoms of progressive supranuclear palsy, staring into space and becoming frustrated with the struggle to produce language. It was difficult for me to connect with her, though I tried every time we visited. I didn’t understand neurodegenerative disease at that point, only that something was wrong. Diagnosis took quite a few years.

As she progressed in her disease, I grew to know her more in stories about her drive, talent, beauty, and love and service for others, but especially through her music. At one point I sifted through all her old music, classical and Broadway pieces she used to sing and play, as well as old Kundimans (Filipino love songs). They’re now on my music shelf at home. Communicating by email, she asked me to help her finish editing her book about divine mercy in others’ lives and struggles.

The last time I visited the Philippines she could barely speak or move. I filled the house with her favorite music on piano and my violin, and though she couldn’t speak, I knew she appreciated it. My memories of the light emanating through the window in square patterns on her bed are vivid. It was next to those square patches of light that I played violin for her one last time—one of her long-time favorites, Londonderry Air. A few weeks later, she passed away.