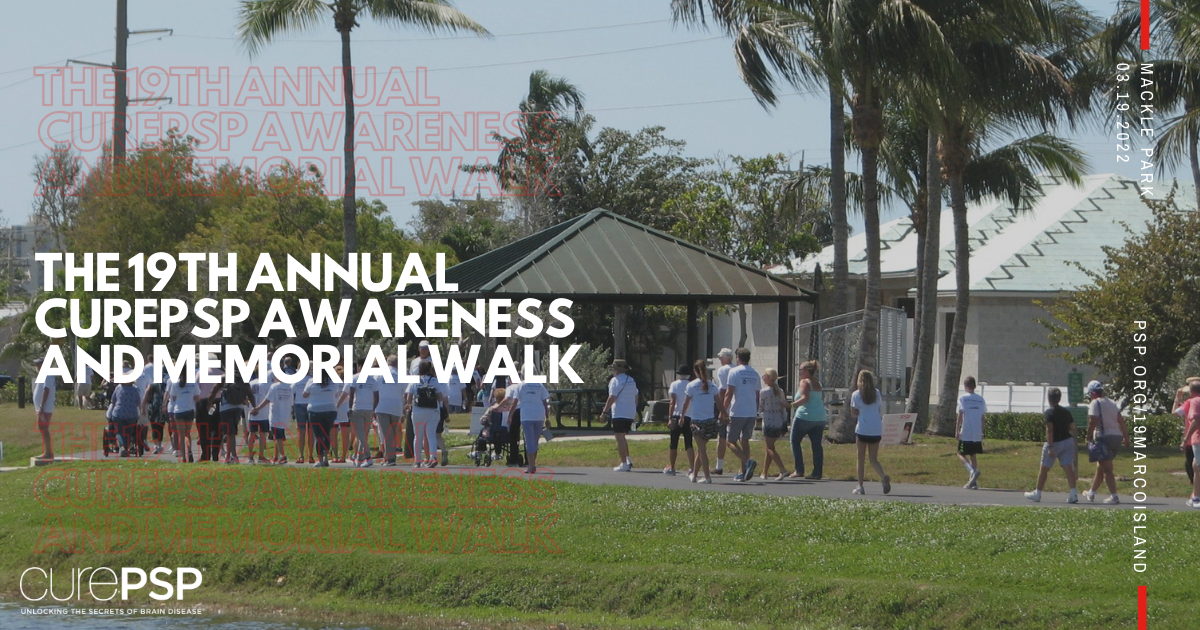 Cindy MacDonald lets out a virtual gasp when I tell her that over 100 people had already registered for the 19th Annual CurePSP Awareness and Memorial Walk. She knows that the number of walk-ins has always been higher than those that pre-registered, and wants someone to pinch her when she thinks about how far the Walk has come. In its first few years, the Walk attracted no more than 40 dedicated people. After a two-year COVID-19 hiatus, MacDonald and the rest of the members of the CurePSP Southwest Florida Support Group are prepared for the biggest Walk yet, featuring the first ever Friday evening Meet and Greet as well as plenty of prizes both small and large.

“My drive is the people,” MacDonald said. “A lot of them are going through this alone. You can get on a computer and log onto different things but it’s not the physical connection. I’m a hugger, always have been.”

MacDonald’s motto: “if you build it they will come,” was adopted from the Walk’s founder Joan Reifler, who first attracted MacDonald to the event in 2005 and has kept her her coming back ever since. MacDonald and her late mother, who had progressive supranuclear palsy (PSP), were shocked to find a group of people who even knew what PSP was. She says that those first walks were more like get-togethers, with a light stroll around the parking lot of the Naples Bath & Tennis Club, a luncheon, some prizes, and the sweetest attraction: 500 gourmet cookies baked by Reifler herself. There may be no better measurement of the event’s growth than the number of cookies baked, which is already over 1,000 and still uses some of Reifler’s original recipes.  MacDonald promised Reifler that she would keep the tradition alive for as long as she was in charge.

Another signature mark of the Walk since its inception is the large square signs placed around the lake at Mackle Park dedicated to those that are still living with or have passed away from these diseases. Each sign tells a story: countless hours devoted to fighting the uncompromising symptoms and preserving the resilient spirits of loved ones. Christina Dean, a member of the support group since 2010 after her uncle had PSP, says that the signs remain the most touching part of the day.

“We don’t know everyone on these signs,” Dean said. “But regardless we know what they and their loved ones have been through.”

This year’s Walk will feature a record number of signs — somewhere around 60-70, according to MacDonald, who welcomes the tributes after two years of “online walks.” Those virtual fundraisers were actually some of the most financially successful “walks” to date, but they couldn’t provide that critical physical connection.

“We all know we don’t live forever,” Steiner said. “But when you’ve been on a support group with people and then all of a sudden they’re gone, that’s hard.”

Those within the network will have an additional chance to mingle on Friday evening with the first ever Meet and Greet, taking place at the Bonita Bay Club at 6:00 p.m. The new event was spearheaded by Frank Semcer, a member of the group since 2018 and a caregiver to his wife Mary Jane. MacDonald had first proposed the idea of some sort of gathering, and before she knew it Semcer had volunteered to cover all the expenses and host the event at his country club, equipped with hors d’oeuvres and guest speakers including Dr. Kristophe Diaz, Executive Director and Chief Science Officer at CurePSP, as well as Dr. Sally Temple, Scientific Director and co-founder of the Neural Stem Cell Institute and the recipient of the Walk’s fundraiser for the second consecutive year. Semcer emphasizes the importance of 24/7 support for patients, families and caregivers, be it accepting the initial diagnosis, managing with the chronic symptoms, or coping with the passing of a loved one.  He says that family members continue to participate for many years to support others still dealing with the diseases and to provide the benefit of their experience.  He added that the event is a powerful way to honor those who cannot be there.

“It’s from the heart,” Semcer said. “It’s not about raising money, it’s about once a year doing a wonderful thing and hopefully raising some money for PSP.”

The larger the Walk becomes, the better it accomplishes MacDonald’s ultimate goal: awareness and education. A lack of answers is a common part of the PSP journey, but by increasing awareness the support group hopes to minimize unnecessary stress and maximize effective diagnosis and treatment. That guiding principle has led the group this far, and several members including MacDonald, Semcer, and Jack Phillips express optimism in Dr. Temple’s “breakthrough technology,” which offers hope for not just PSP but other related diseases such as Alzheimer’s and corticobasal degeneration (CBD). Phillips, who joined the group in 2020 and became a board member of CurePSP in 2021 after his wife Linda was diagnosed with PSP, believes that increased awareness will lead to increased funding.

“Most people have never heard of PSP nor CurePSP,” Phillips said. “They don’t realize how it’s related to dementia and Alzheimer’s, but almost everyone knows someone with dementia or Alzheimer’s.”

He remains optimistic that tests, treatments, and eventually therapies will be created for patients. Chris Curle, whose husband Don Farmer died in March 2021, reached out to MacDonald in November 2020, offering to use her writing and reporting skills from a career in broadcast journalism to publicize the group’s efforts. She has written articles in the Naples Daily News imploring local community members to come walk with her to remember those who have passed, support those currently fighting, and imagine a cure.

“It seems that a treatment for one of the half-dozen diseases certainly will apply fully or partially to others,” Curle said. “So, I see the CurePSP walk as an umbrella effort to help find treatments or a cure for all the neurodegenerative brain diseases.”

After months of diligent planning that goes down to the color of the napkins, all members of the Support Group look forward to the Walk that is a testament to their courage and strength. They may not be able to change the harsh realities of these diseases, but they will always have each other, and will continue walking forward together.