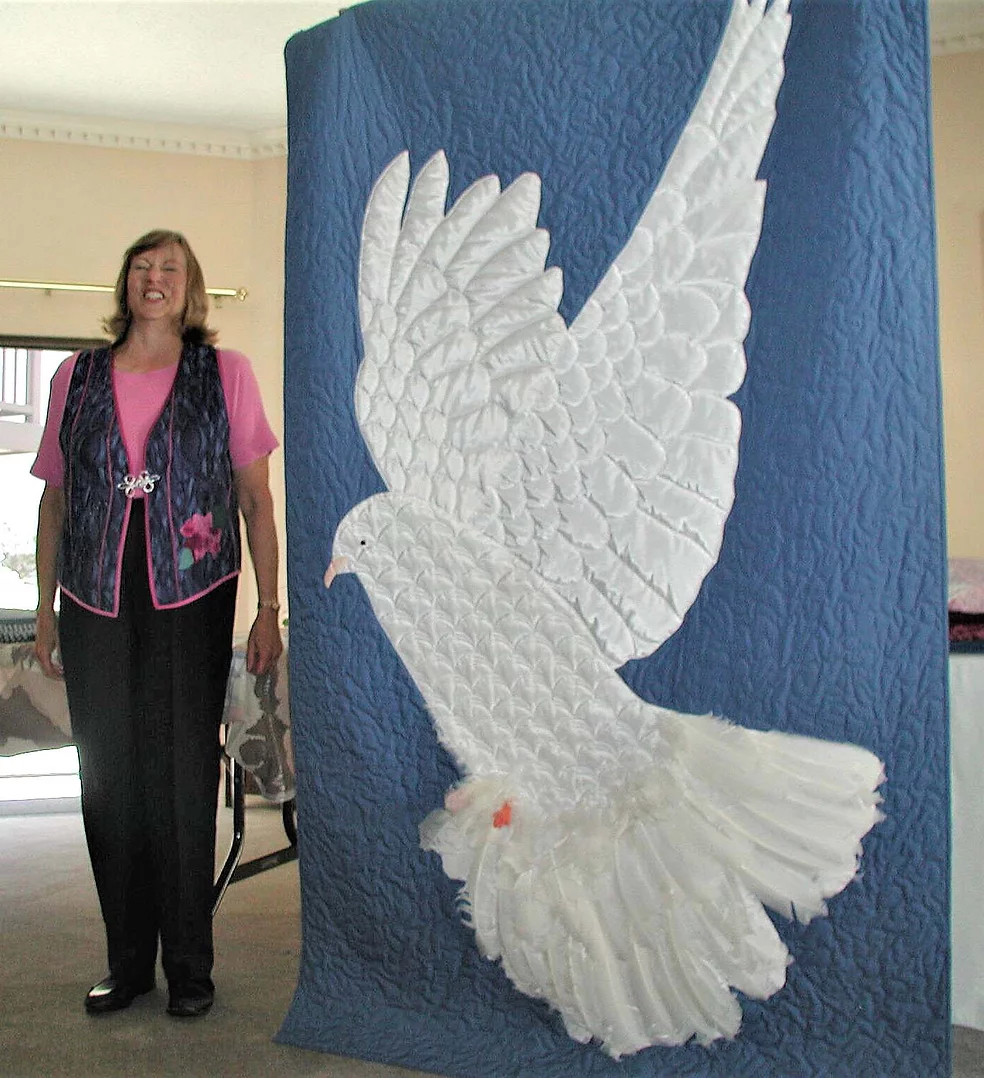 After being released from an emergency room in Alaska, Diane Deaver needed to pick up her Bell’s Palsy medication. She asked her son-in-law to make one stop before the pharmacy: the post office. She needed to mail her quilt, which she had worked tirelessly on while visiting her daughter and son-in-law in Alaska, back home to her husband Doug in Santa Cruz so that he could submit it in the upcoming quilt show.

“You and I think of an all-nighter as being a term paper,” Doug said. “Diane thinks of it as a quilt show.” 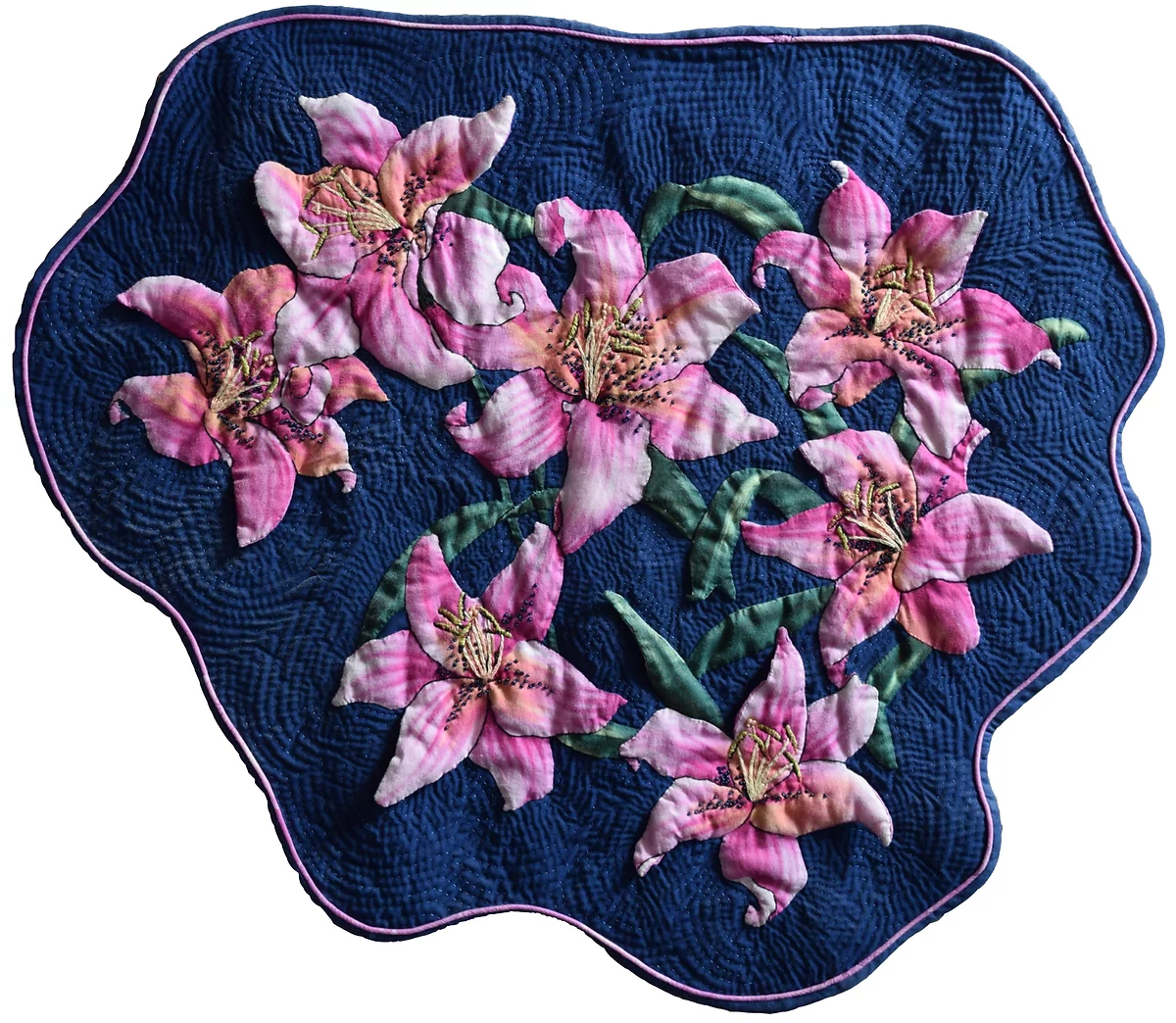 After first learning how to quilt by taking a class in the Philippines, Diane honed her craft and produced over 100 hand-made quilts. They take longer to make than machine quilts, but Diane prefers hand quilting. For many years Diane belonged to a small quilt group and a quilt guild where she developed many valued friendships and won several awards. She was forced to retire from quilting following her progressive supranuclear palsy (PSP) diagnosis in 2018, but maintains her creative spark through poetry, where she hopes to inspire others and document the exuberant spirit that still lives inside of her.

“I hope that it can make people with PSP and other diseases feel less alone by showing what it’s like to suffer these changes in my life,” Diane said.

Prior to her diagnosis she had begun writing a book of family memories that she would leave to her children and grandchildren, memoirs that shifted to poetry after her diagnosis. The stream of consciousness form comes easier to her, and helps her produce a more consistent output of work. Not to mention that she had already won a 2016 Valentine’s Day poetry contest in the local Aptos Times newspaper for a poem about Doug. One of her favorite poems is “Special Folks.” 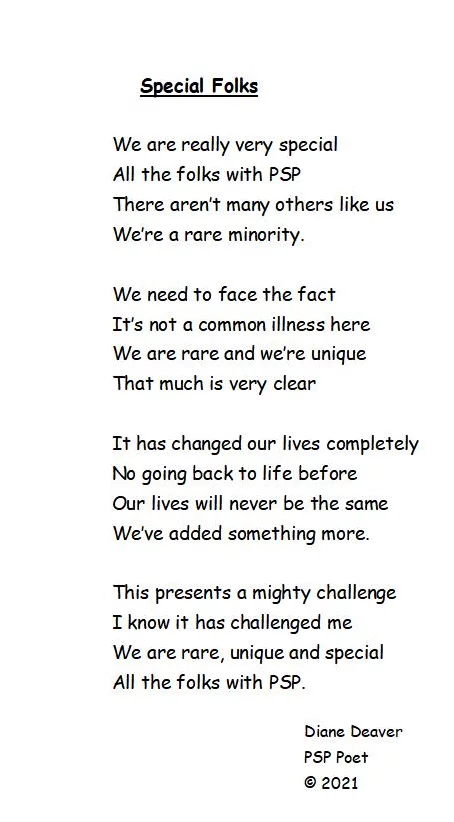 Diane keeps a blank notebook so that she can jot down any thoughts that might come to her. Family gatherings, old friends, and recent activities are all preserved through Diane’s poetry, reminders of the many wonderful experiences that the Deaver’s have shared. Writing has also become a remedy for Diane’s PSP symptoms, specifically insomnia, which is more frequent in PSP than other neurodegenerative disorders. On restless nights, Diane fills her mind with positive thoughts like poetry to cleanse the distractions.

“Sometimes while lying in bed I write a poem in my head and then try to memorize it so I can dictate it to Doug first thing in the morning,” Diane said.

Diane’s commitment to these mental exercises have helped preserve her radiant spirit, and she also credits a clinical trial at UC San Francisco (UCSF) for slowing the disease’s progression. She’s been participating in the clinical trial since 2021, which includes 18 pills per day, speech, occupational, and physical therapy, as well as a visit to UCSF every three months for routine testing.

“It changes everybody’s life,” Doug said. “It creates a change in your life that you have to adjust to.”

They both admit that the journey has been a learning process, specifically in finding the right equipment for the house. Diane says that the CurePSP monthly patient support group has been a huge help in navigating the challenges by getting suggestions from others who have had the same experience. Connecting with others has been an invaluable resource throughout the process. Neither Diane nor Doug could have envisioned this future when Diane first had balancing issues four years ago which led to seeing a neurologist who made the diagnosis. They have managed to turn their gratitude into a garden, watering it with cherished memories and healthy practices to maintain a natural glow.

“I try to focus on my blessings,” Diane said. “Even though it’s a terrible situation sometimes, I’m really grateful that I have Doug to take care of me and that we have the resources for things like caregivers so he can also get some relief.”

One positive outcome is that they see their daughters and family more often, including numerous visits from friends and relatives. Despite her PSP symptoms, Diane is still doing everything she can to stay active, and her poetry is just one way of sharing that.

To see all of Diane’s poetry and quilts, check out her website here.

And for more information on assistive devices and adaptive equipment, click here.