In his 9th article, John Royer remembers a hospital visit where he discovered he had unknowingly suffered a stroke months prior. 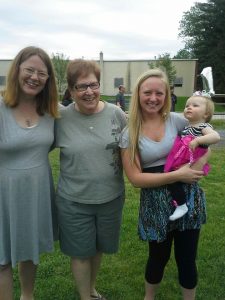 There is a hospital stay

that I forgot to mention that occurred at the end of 2015 and extended slightly into 2016. I blame the oversight on PSP.

Of course, I blame all my memory lapses on PSP.

Sounds good to me.

On the day after Christmas in 2015, I had a major fall which necessitated a trip by ambulance to the hospital. While there, the staff performed and MRI on me and found that I had had a stroke sometime in the last few months. I admit that I had noticed a trembling in my left hand but attributed it to old age.

After a few days, I was sent to a different facility of the hospital system and started rehabilitation for the stroke. PSP was still an unknown factor in this whole scenario.

I felt like royalty when I arrived because I got a room with its own shower and one bed. I had control over the TV and the whole room and bathroom.

By this time in my life, I was getting used to the wheelchair part of the time and a walker all the time.

Welcome to the world of the partially disabled.

There are two parts of the rehabilitation process. One was to improve mental acuity and the other was to improve physical activity safely. Everything was geared towards a stroke victim because no one knew anything about PSP. Actually I was a combination of both PSP and stroke but neither I nor the staff knew that so we all did the best we could, given the circumstances that we knew about.

I had to be careful using the walker because I tended to lean to one side, something that I had noticed at home as well. A nurse always had to be at my side when I took a walk in the hall or walked to therapy.

I even needed a nurse to get me out of bed and walk me to the bathroom, a short distance away. This was a bit embarrassing but again necessary. Ditto for the shower. I hated the shower because the water felt too cold. I checked and found out that it was set at 95° to prevent burns. I thought that’s what the cold water tap was for, to control the heat.

I enjoyed the mental acuity therapy thoroughly and did well. Thank God my brain had not been affected (or so I thought), just my body. The physical therapy was a different matter altogether. When I had to walk along the parallel bars, I panicked when I let go of one of them to turn around. I was used to my walker and a wheelchair. Over a number of days, I got better and got my confidence back to a tolerable level. When I looked back, I think that I had the stroke sometime just before Christmas even though the doctor said that they could not determine the time at which it happened. There had been a change in December but I couldn’t put my finger on it. I just felt more unstable and weaker.

I blamed it on old age again. Why not? Sounded good to me.

The best part of the day was when I was on the bicycle machine looking out the window over the fairgrounds. The parking lot that my wife parked in was beside it and I could see when she pulled in and look forward to seeing her and the kids.

Kids? They’re in their 40s but are still my kids.

The hardest part was standing in the parallel bars on top of a flexible cushion and letting go. The idea was to balance yourself without holding onto anything and I found that difficult to do, especially since they asked you to cross your arms when you are doing it.

Another difficult exercise was walking forward along a white line painted on the floor while keeping your eyes closed. Invariably, I ended up off the white line by the time I got to the end. When I got good at that they asked me to do it backwards and that was hilarious. Way off. But at least I didn’t fall. I knew my miles-long walks were over but at least I can do a few feet without aid.

They never did let me walk around on my own but at least I got to the point where I could use the walker without assistance.

They let me go home right around New Year’s Day and I thought I was home free until February struck. You can see article 1 for a short story about that.

And did I mention that I met some funny people in the hospital. Medical folks are some of the funniest that you will ever meet. They can make a hospital stay enjoyable and fun.