Finding Room for Love in Caregiving 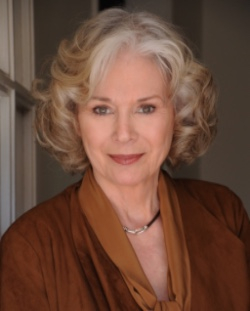 Geoff Miller, founding editor of Los Angeles Magazine, the first city magazine, and lover of jazz, good beer and the good life, passed away after a battle with PSP.  Here his wife, actress and author Kathryn Leigh Scott, tells their story.

The first time Princess Diana dropped by our house to visit my husband, I missed seeing her because I was in the kitchen making him a blueberry-banana milkshake. “Don’t worry,” Geoff told me later when I was helping him drink the shake. “She’ll be back.” Indeed, Princess Di continued to check in on him now and again, but her spectral visits seemed to always coincide with my absences.

My husband, Geoff Miller, the founding editor of Los Angeles Magazine, created the template for the first city magazine in the country while doing graduate work at UCLA’s School of Journalism. But the man who had spent his entire working life as an editor and publisher couldn’t grasp a pencil, read, or even drink a milkshake unassisted. At age 69, he’d been diagnosed with Progressive Supranuclear Palsy (PSP), a neurological disease that afflicts some 20,000 Americans, a number equivalent to those with Lou Gehrig’s disease (ALS). PSP is one of several progressive prime-of-life diseases that has claimed the lives of actors Robin Williams and Dudley Moore, and billionaire financier Richard Rainwater.

Occasional forgetfulness that I had blithely referred to as typical male inattention had turned into more frequent bouts of confusion and disorientation. He often joked about “losing his marbles,” but neither one of us wanted to think spells of “befuddlement” were signs his mind was slipping or might be symptoms of dementia. Medications he took to treat PSP also played a part in hallucinations that manifested in visits from Princess Di.

He’d always had a soft spot for Di, and we’d stayed up to the wee hours of the morning to watch her funeral on television. I was glad she found time to drop in when she sensed he’d appreciate her company. “Next time say ‘hi’ from me,” I would tell him. If he enjoyed her brief visits, I didn’t want to spoil his pleasure.

However, it occurred to me that even though we were “together” up to 23 hours a day, he still might feel that I was too inaccessible. While I’d cut out a lot of my outside activities to care for Geoff, I still had household and business matters to deal with, besides trying to eke out time for my own work as an actress and writer. Geoff, who had once been so strong and vital, a great storyteller with a wonderful sense of humor, was left to wile away his days feeling he had no purpose in life. But even though he couldn’t walk and was losing his ability to speak, his mind remained active despite memory lapses. No wonder he’d concocted sporadic visits from Princess Di to keep him company!
I also realized that despite taking him to physical therapy, reading to him and providing him with the assistance he required, I’d been too accepting of Geoff’s decline and not fulfilling his emotional needs. He was signaling his frustration; he needed hope and, what’s more, the sort of loving attention I suspected he was finding in flirtatious encounters with Princess Diana.

Yet I couldn’t allow Princess Di’s clandestine visits to crowd our marriage, either. I empathized with Ruth squaring off with her husband’s deceased wife, the ghostly apparition of Elvira, in Noel Coward’s Blithe Spirit (I’d played both roles in different stage productions!) and suspected Princess Di of having the edge on me. If he summoned her ethereal presence to bring romance to his life, it was because it was slipping out of ours.

I keenly felt the loss, too. While men may sometimes fall in love with their nurses, a wife assuming a caregiver role can spark the opposite reaction. Despite the moments of warmth and tenderness we still shared, marital intimacy of the sort we’d long enjoyed began fading with Geoff’s physical deterioration and our changing roles. The sweet endearments had vanished as he lost his voice. His touch wasn’t so much of longing as a reach for safety and security.

However, I still felt a thump of happiness when I caught a glint of mischief in his eyes and knew he still felt a wave of love for me when I held him close. With so much else changing in our lives, I couldn’t bear to lose whatever vestiges we still had of the physical love and desire that had been such a valued part of our relationship. In a very conscious and purposeful way, I made time for intimacy between us.

I found I could be both the efficient, ever-present caregiver and the wife who made him feel loved and special. A “date” meant sitting together in the twilight, a candle lit, holding hands and listening to our favorite Cole Porter and jazz CDs, with a glass of wine for me and a few sips of pilsner for Geoff. We began enjoying our own “happy hour” together, a quiet time of reflection, heartfelt words and soul-nourishing closeness.
With my birthday approaching, I knew it hurt Geoff that he had so little means left of showing his love for me. The husband who’d been so romantic and demonstrative in his affection for me could no longer surprise me with flowers or shop for the perfect gift. He couldn’t even rely on his voice or facial expression to convey tender feelings. Yet sitting together on my birthday, holding hands, our thoughts attuned, and feeling the warmth of his closeness, he managed to give of himself, the gift of being there for me. Whatever we faced down the road, he was central to my life and always would be.

Praise for Last Dance at the Savoy

“Scott provides a remarkably personal portrait of a romance that transcended tragedy…Poignant, candid and almost painfully intimate, Last Dance at the Savoy is like having coffee with a close friend and discussing her recent loss. You’ll only wish you could take her hand while she talks.”―Examiner.com

“Last Dance at the Savoy is ultimately a love story about two people who live life to its fullest in the face of terminal illness. There is no journey more intimate, more arduous, more self-sacrificing than caring for a loved one―and with a spouse, more revealing of what true love is when roles change and one partner becomes more vulnerable and dependent.” ―Patricia Richardson, actress and national spokesperson for CurePSP

“Last Dance at the Savoy is at once a delicate, moving love story balanced by a cautionary tale. Written with insight and compassion, we understand the struggle and courage required to face a debilitating disease attacking the person at the center of your life.” ―Susan Sullivan, actress

“Last Dance at the Savoy is a moving chronicle of the daily struggle of caring for a spouse with a debilitating illness, full of honesty, vivid descriptions of emotional and physical challenges and keen observations leavened with wry humor. But it is so much more: Kathryn Leigh Scott has written a love story for the ages that will have universal appeal. This is a deeply affecting and inspirational book.” ―David Kemp, President, CurePSP

More personal stories here
We use cookies on our website to give you the most relevant experience by remembering your preferences and repeat visits. By clicking “Accept All”, you consent to the use of ALL the cookies. However, you may visit "Cookie Settings" to provide a controlled consent.
Cookie SettingsAccept All
Manage consent