This article by John Royer, who sadly passed away from PSP in September, imagines a world where someone has recovered naturally from PSP. If only that were possible. 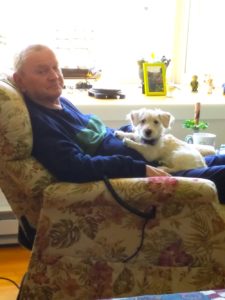 It’s time to go back to doing what I used to do. I’ve experimented with letting you know what it’s like to try and communicate well in a stroke condition – it is a bad idea. It has shown me what it’s like to be a man after a stroke but according to my speech therapist it is a poor idea. It inhibits my ability to get better. I will take a long time to read my articles but at least it will be correct or as close to be correct as I can make it.

My walking has become worse and on September 28, I’m going to speak to a specialist in wheelchairs. That person will tell me what type of wheelchair I can use and whether I can fit it into my car.

My PSP has been on hold for a very long time and it do not seem to be getting worse except for the walking. I had been drinking more water at night and find that my dizziness in the morning is better. People tell me that the dizziness might be caused by being dehydrated. So I am giving it a lot of thought and have decided to try two waters at night. This morning it is a lot better and perhaps the idea of drinking more water is working.

The thought of having PSP is despicable. I always thought I’d have a clean death like the one that my father had. It is not to be. PSP is like cancer. It sneaks up on you slowly and inexorably. There’s a difference with many types of cancer. It can be cured as it was in my case in 1985 and 1995. Sometimes it is not and the patient dies but at least in some cases there is hope for a cure or a miracle. And miracles do happen. It’s been documented. But PSP is different. It has no cure and no miraculous recoveries have occurred to my knowledge.

It is slowly eating away at my ability to walk. This is a problem for us of the greatest magnitude. We have a small house of 1000 square feet. It is a rancher. We have a small car, a Toyota Prius. We would have to own a van to have adequate room to put a wheelchair inside of it. On top of the new van, we would need many dollars in order to adapt a lift to it. The cost of the car plus the cost of the adaptation make it incredibly expensive for us. We could afford to do it but at a huge dent in our retirement.

Does this make me hate PSP even more? It most certainly does.

I guess I can’t complain too much though. When I was young there were three of us, Werner and Bob. The first died at 27 in an automobile accident and the second died of cancer at 30 caused by smoking and insulating pipes with asbestos coating. We used to be the Three Musketeers and did just about everything together. None of this had anything stronger than alcohol in the form of beers. We were all known as clean living young men. I am more than twice the age of either meant so I suppose I can be grateful for the extra decades of life. I missed the years that I would have had getting along with them and their families. I have often wondered what it might have been like. But Mother Nature and bad driving had given them a bad deal of cards. I have friends today but have never had one as close as either of those two guys.

I still think that there must be an anomaly out there someone has had PSP and who has recovered from it. The problem is that he would not have known it.

Imagine if we had a perfect world and everyone got along. Imagine there was a planetary database with the DNA of everyone on the planet. Imagine that the anomaly had been found and with his permission analyzed to find out why his damaged DNA had healed itself. There would have had to been a mark in his damaged and repaired DNA that showed that it had been damaged and healed. He or she could then be analyzed with his or her permission to find out why this had happened, why he or she was an anomaly. Then a cure could be found for the rest of us who have the monster in his and her head, PSP.

The first problem is that we can’t get along; we cannot trust ourselves with each other. And that’s a shame.

If I was the anomaly…

Is that ever funny? I only wish.

If I was the anomaly I would be very glad to give some of my blood so that a cure could occur. Imagine how I would feel?

Unfortunately, there has yet to be a cure for the inhumanity of man towards man. If we can get along we could cure all of these problems instead of trying to kill each other.

I feel that I’m becoming philosophical and that’s a bad idea because there’s always arguing amidst proponents of different philosophies.

On that, I will end this article which is number 21, if you have been following.

Keep smiling. It’s got to get better eventually.