A short while ago we received a letter from John Royer, a man living with PSP, and we placed it on our blog.  We suggested we could post more of his thoughts, and he sent us this: 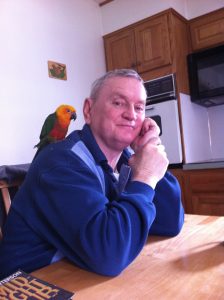 Dizziness upon sitting up in the morning.

When I sit up in the morning the view opposite is dropping violently. It’s like being in a barrel perpendicular to the axis of spin while the barrel is rotating. It started when I cut the grass years ago and looked up upon finishing. Now it’s worse and I get it when changing the spacial orientation of my head from looking down to looking up. Morning is the worst time and it lessens as the day progresses but it does not disappear. Do other PSP victims get the same reaction, I wonder?

I like to say that I am on a ship’s deck in the North Atlantic during a storm. I smile when I say it. But what do I actually feel? What are my internal thoughts?

This is the picture of my thoughts.

The sky is dark but lights up as lightning arcs overhead. Thunder roars in my ears. Monster waves surge with white tips. The ship rolls and I look for a rope or a gunnel to grab with a death grip. My heart pounds with fear.

That is a picture, a caricature, of how I feel every day.

I am seeing a neurologist later this month to exchange thoughts. I have not seen one in years but one can only hope…