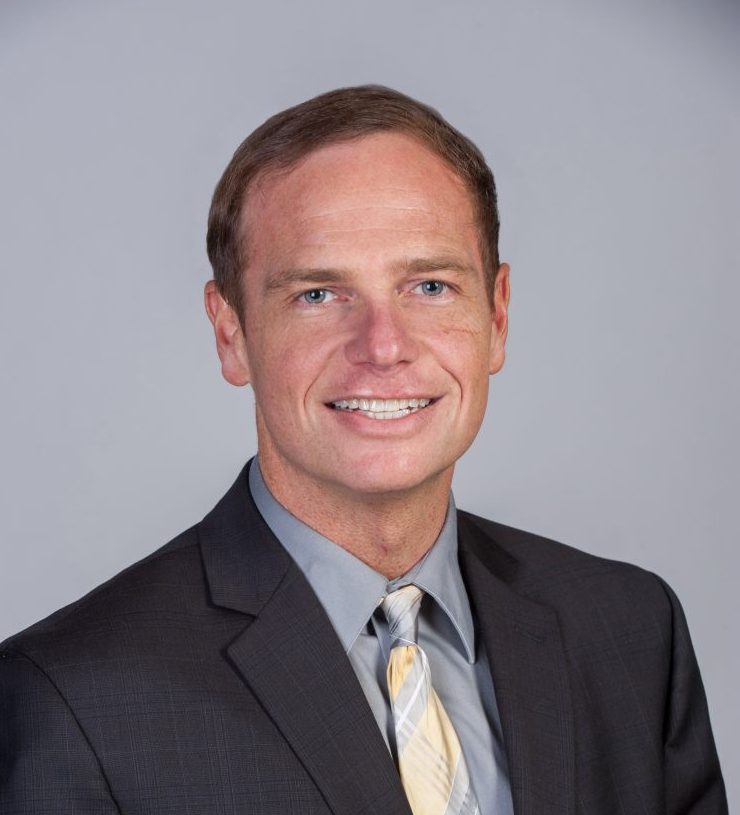 Very few patients with a rare brain disease such as Progressive Supranuclear Palsy, or PSP, have the liberty of choosing a doctor. It’s hard to find a doctor who even knows what the condition is, much less find a specialist for it.

When you discover, as I did, that Las Vegas has a Lou Ruvo Center for Brain Health by the world-renowned Cleveland Clinic, you have to consider yourself very lucky. I knew that was where my mother, who was diagnosed with PSP in 2013, had to go. And as luck would have it, she became a patient of Dr. Brent Bluett, who is not just a smart and skillful doctor, he is a passionate, friendly, and genuinely sweet one.

Dr. Brent Bluett, an Assistant Professor of Neurology and Movement Disorders specialist, was the only physician on the list of 40 under 40 in Las Vegas this year – and he’s one of a kind for many reasons. He conveys a rare warmth – and is very good at taking the temperature in the room – and working with the people in it.

Case in point: As my mother’s neurologist, he would administer Botox to relieve the stiffness in her neck and left arm, and also to her salivary glands to prevent drooling. During one session, Dr. Bluett, sensing the need to help my mother feel at ease, complimented her on her straw hat, and then put it on his own head. He succeeded in making my mother laugh, which is a truly rare feat these days.

You can read the very storied list of accomplishments on his bio, available on Cleveland Clinic’s web site, which also includes numerous glowing reviews from many of his patients. While visiting my mother recently, I took it upon myself to visit him and ask him some of the questions I felt those dealing with PSP would want to know.

Sylvia:  When patients come to you, do they have any inclination of what they have?

Dr. Bluett: Never. Actually that’s not true, if they’ve been seen by somebody who says, “some form of Parkinson’s,” that narrows it down to four diseases, usually then we have an idea.

Sylvia: Dr. Bluett, your office was the first full-day clinic for Botox in Southern Nevada. Is the use of Botox for PSP well known? Can you tell us more about it?

Dr. Bluett:  At one of the CurePSP family conferences in San Francisco, I gave a talk on overview management and the trajectory for typical PSP patients aimed at caregivers and their families and for their patients. You hear people say, “it’s some type of Parkinson’s, she’s not responding to Sinemet, I don’t know what to do.”

I was talking to them about Botox for drooling, for eyes closing, for muscle contraction and people were amazed. It was upsetting, honestly, because I see these people after they come in after four years. That could have been four years of a much better quality of life. To answer your question, botox is done, but not as much as it probably could be.

There’s something called apraxia of eyelid opening, where the eyes actually close, and [the patient is] unable to get them back open, so they have to use their fingers, that can be resolved with Botox. Dystonia is a bigger problem: it’s an abnormal, excessive contraction of muscle. In PSP it’s called retrocollis, where the neck actually goes back and is kind of stuck, that in conjunction with the inability to move the eyes makes it actually impossible for someone to be aware of their environment, making them fall. With Botox you can help that. People who treat Parkinson’s aren’t really aware of that.

Sylvia: Mubina Khan, whose mother has PSP and is someone I interviewed for my New York Times story, is very curious about Tasigna, or Nilotinib. She has heard that the drug, used for leukemia, could also be used for PSP.

Dr. Bluett: Here’s the unfortunate truth – we’re all reaching for a magical cure. Tasigna/Nilotinib is an FDA approved drug for a type of leukemia called CML (Chronic Myelogenous Leukemia). It is a ‘protein kinase inhibitor’, meaning, it blocks abnormal signals to stop cancer cells from dividing and multiplying. In animal models, nilotinib not only reduced alpha-synuclein (the abnormal protein that accumulates in Parkinson’s disease) but also another toxic protein called tau (the abnormal protein that accumulates in PSP and also Alzheimer’s disease).

A small study using Tasigna/Nilotinib in Parkinson’s disease patients at Georgetown [in 2015] was promising, but it was an ‘open-label’ study, meaning the patients were not blinded and knew that they were getting the drug nilotinib. This could mean that the improvement in symptoms was caused by a placebo effect, instead of the medication. However, further ‘controlled’ studies will be performed to evaluate the safety and efficacy of Tasigna/Nilotinib in both Parkinson’s disease and PSP. In the meantime, there are studies being performed with monoclonal antibodies to reduce tau in patients with PSP, to evaluate their safety and efficacy.

Sylvia: According to your bio, you are an specialist in Deep Brain Stimulation. Tell me about that, and whether it works for PSP.

Dr. Bluett: So it’s more effective in Parkinson’s disease. Essentially, the brain is a circuit that’s oscillating, like a network, like a computer. What happens in Parkinson’s and these disorders is the oscillations get off-kilter. So they put these electrodes in tiny parts of the brain for Parkinson’s to help regulate that loop and get it going normally. Patients go in for the surgery, they get the electrode in their brain, come back [later] and reprogram, and we get to see the most amazing transformations I’ve seen in my life. Basically if they have Parkinson’s, they are shaking like this (demonstrates an arm tremor) for years and years and years, and I use the electrodes, and then their loved ones are crying. The first few times I did it, I mean, I was about to cry, it’s unbelievable. Unfortunately: works great for Parkinson’s, great for essential tremor, but they haven’t found the target for PSP.

Sylvia: What are some of the biggest problems surrounding the disease? Is it discovery?

Dr. Bluett: Not everyone lives in New York or Las Vegas or major cities. Some people live where they don’t get care for these disorders and they’re lost. The local community has no idea about the disorder, they get shipped from physician to physician, specialist to specialist, you see a doctor for your pinky, there’s a doctor for your ring finger, but none of them have any idea. Eventually you get to the actual truth, but it takes forever, by then it’s often too late to do anything, or it’s late enough that bad things have already happened, for PSP falls, swallowing, choking, all that.

Sylvia: What do you suggest for a solution?

Dr. Bluett: By creating a Centers for Excellence initiative, we can increase awareness by identifying places throughout the country where there are experts in PSP. I would say there are about 50 physicians who are really aware of the disorder and they really know it, in and out.

There’s probably a lot of people who have PSP. If people know about it, and are able to identify it, it would help a lot. It’s also about potential donors. I think that’s what the major emphasis would be for these Centers of Excellence: to help people on the ground.

Sylvia: What can people who know about PSP do to help spread awareness?

Dr. Bluett: Honestly, if we were gonna do (something like) an ice bucket challenge, I think having people just look up or down, follow your finger and move up or down, that would really be the way to go. Because that‘s really how you tell, and differentiate (the disease.). There’s only five or six things that cause you not to look up or down.

Sylvia: What is the best thing about your job?

Dr. Bluett: I found the best part of my job is – I see a lot of people with neurodegenerative diseases – there’s just beauty in the collection of people who are going through a tough thing together. They really unite. And that’s a real beautiful thing in life.